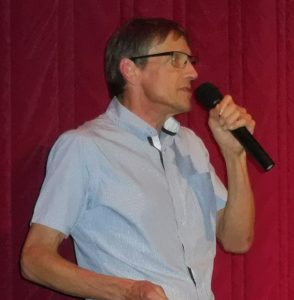 Dr Malcolm Mackay is a General Practitioner with more than 30 years of experience in medical practice. He has a broad range of skills across the full spectrum of general practice. His practice is based at   Clinicare, Fitzroy, Melbourne. He also provides Telehealth consultations for patients from other regions of Australia.

Dr Mackay has a special interest in preventing and managing chronic disease with whole foods plant-based nutrition and other evidence-based lifestyle interventions. He is co-author of a website providing information and resources for those interested in this approach and is active in social media. Malcolm and his nutritionist partner Jenny host seminars and webinars and often speak at public and private events.

For more information about whole foods plant based nutrition, visit my other website and associated Facebook page:

An article in Melbourne’s Age newspaper today is an example of how even when something negative is reported about an animal product, the discussion dismisses the finding and flips the issue around into something positive about it. ‘Our diet the flip side of the egg debate’ reported a review in the American Journal of Lifestyle Medicine on the increase in industry-funded egg studies from “none in 1950s to 60 per cent of research conducted between 2010 and 2019”.

The journalist presented the story as a two-sided debate – “comical claims that eating an egg a day is equivalent to smoking five cigarettes” (a criticism directed at the film What The Health) versus the saturated fat and cholesterol advocates. She claimed that the 2015 USA dietary guidelines removed the cap on dietary cholesterol. What the guidelines actually said was, “individuals should eat as little dietary cholesterol as possible while consuming a healthy eating pattern”.

A nutritionist informed us that cholesterol is “an essential substance with several functions in the body” and said that “eggs are a non-issue” and a distraction from more important issues. A medical expert said that the body’s ability to absorb cholesterol from the gut was more important than the amount of cholesterol in the diet and that this ability is inherited and we can do no more than eat plant sterols to reduce the absorption. He did not seem to have considered the possibility that one could eat a plant-based diet and there would be zero dietary cholesterol to absorb.

The final paragraph concluded that dietary cholesterol can be good in the right amounts because it supports essential bodily functions. This is nonsense because the body manufactures all the cholesterol it needs and there is no dietary requirement for cholesterol. What wasn’t reported was that the review article found the majority of the research studies, regardless of funding sources, showed that eggs have unfavourable effects on blood cholesterol... “However, 49% of industry-funded intervention studies reported conclusions that were discordant with study results (ie, net cholesterol increases were described as favorable in the articles’ stated conclusions), compared with 13% of non–industry-funded studies.” See review article -https://journals.sagepub.com/doi/abs/10.1177/1559827619892198 (NB full text is not open access)

Here is a link to our Eggs FAQ from 2018 where we discuss egg industry funded research - www.wholefoodsplantbasedhealth.com.au/resources/faq/eggs-health-research/ ...

Share on FacebookShare on TwitterShare on Linked InShare by Email

Standard appointments are up to 15min duration.
Please book a DOUBLE APPOINTMENT for nutrition or complex problems.
Remote consultations are booked directly with Malcolm

Skype/Zoom consultations are available to patients living in Australia. Dr Malcolm can assist with the management of chronic disease using nutrition and lifestyle medicine.
Prescriptions, pathology requests etc can be issued when required and are valid across Australia.
Note that there is no Medicare rebate for telehealth (remote) consultations.